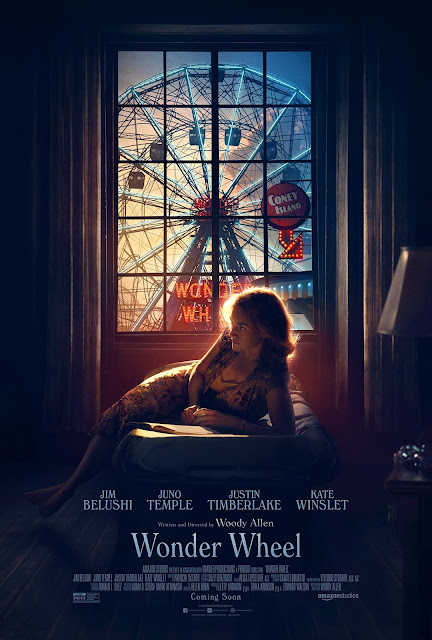 ★★ - A Review by Cameron Kanachki

Annie Hall. Manhattan. Hannah & Her Sisters. Midnight in Paris. These are all some of the greatest films of writer/director Woody Allen. From his earlier slapstick comedies to the later existential dramedies, Woody Allen has always been at the forefront of bringing the neurotic to the big screen. While he has made some bad films in his career (albeit more recently than in the past), Allen has, for the most part, had great success with most of his films.

Sadly, Wonder Wheel, Woody Allen's newest film, is one of his worst films yet. Set in 1950s Brooklyn, the film follows Ginny (played by Kate Winslet), a troubled woman living in a small house near Coney Island. Besides working at the clam house on the boardwalk, she lives an uneventful life at home with her loud & uncouth husband, Humpty (played by Jim Belushi), & her pyromaniac son, Richie (played by Jack Gore).

All this changes with a chance meeting with Mickey Rubin (played by Justin Timberlake), an aspiring writer (also the narrator of the film & this film's Woody Allen-esque character). They start an affair, giving Ginny a much-needed break from the doom & gloom of her everyday life.

This also changes with the return of Humpty's daughter (& Ginny's stepdaughter), Carolina (played by Juno Temple). She's on the run from her gangster husband, & she knows where the bodies are buried. Mickey also takes a liking to her, stating that "the heart has its own hieroglyphics" (an eerily close statement to what Woody Allen stated about his marriage to his ex-partner, Mia Farrow's adopted daughter, Soon-Yi Previn). But this is only just the tip of the iceberg of the problems about to hit their lives.

The cast is great. Winslet is excellent, as always, turning what could've been a lifeless caricature into a living, thriving human character. Temple, Timberlake & Belushi are great as well.

Woody Allen's direction is mediocre. It's a far cry from the direction of his glory days, as the film doesn't know whether it wants to be a neurotic comedy or a melodrama.

Woody Allen's screenplay is terrible. The plot is awful & cliched, & the dialogue is nowhere near what Woody Allen's dialogue used to be. It's trite & way too melodramatic, to the point where the film seems like an unintentional parody of a 1950's melodrama. Also, the subplot of Timberlake's character being attracted to Temple's character is disturbing, considering Allen's aforementioned marriage to Soon-Yi Previn & the allegations of molestation brought on by his adopted daughter, Dylan Farrow.

The cinematography by Vittorio Storaro is excellent. The color palette switches between strong hues of red & blue that shine on the characters.

Alisa Lepstetter's editing is awful. There were several bad cuts throughout the film, & unlike Woody Allen's other films, this film dragged along, even though it had a relatively short 101-minute runtime.

Suzy Benzinger's costume design is amazing. The costumes are very similar to the clothing of working-class Brooklynites in the 1950s.

This is a real disappointment. Although it features some great performances & awe-inspiring visuals & design, the direction, screenplay & editing bog the film down a lot. It's time we asked the question: has Woody Allen lost his mojo? And also, what happens when the artist's notably indecent acts in real life start to blur with his work?

Wonder Wheel was seen by me at the MJR Marketplace Digital Cinema 20 in Sterling Heights, MI on Friday, December 15, 2017. It is showing in 1 theater in the Detroit area: the Michigan Theater in Ann Arbor, MI. Its runtime is 101 minutes, & it is rated PG-13 for thematic content including some sexuality, language & smoking.
at December 25, 2017