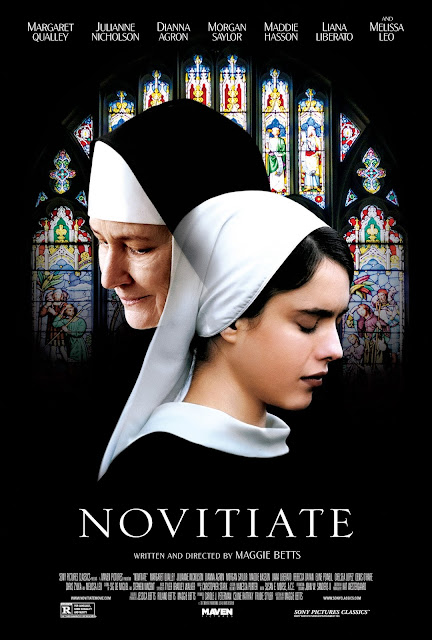 Novitiate, while not always great, provides a good & realistic snapshot into a Vatican II-era novitiate. Set in 1964, the film follows Cathleen Harris (played by Margaret Qualley), a 17-year-old girl at a Catholic school in Tennessee. Her father, Chuck (played by Chris Zylka), left when she was 7. She has decided to become a nun, much to the chagrin of her mother, Nora (played by Julianne Nicholson), a chain-smoking agnostic.

The Reverend Mother is alarmed by the reforms of Vatican II, wanting the ways of the Church to stay the same, unlike Archbishop McCarthy (played by Denis O'Hare), who is open to the reforms. Meanwhile, the postulates, mainly Cathleen, start to release their repressed sexual urges towards one another, which Cathleen's are amplified when Sister Emanuel (played by Rebecca Dayan) arrives as a transfer nun. The sexual urges, combined with the Reverend Mother's cruel ways & Vatican II's reforms, will change the women forever.

The cast is superb. Qualley & Nicholson are excellent. But this film definitely belongs to Melissa Leo. Leo is absolutely horrifying & disturbing as the Reverend Mother. Her character has been considered by some as a female counterpart to J.K. Simmons's Terence Fletcher in Whiplash. I agree with this comparison, as Leo is just as terrifying as Simmons.

Maggie Betts's screenplay is excellent. The characters, who could've been caricatures (especially Melissa Leo's character, who could've easily been just a loud but unterrifying character), are fully fleshed out here.

Kat Westergaard's cinematography is excellent. The dim lighting & the cool color tone match the cold & unforgiving atmosphere of the film, its characters, & its setting.

And Susan E. Morse's editing is good. The flaws in her editing are noticeable, especially in the pacing, but she keeps the film headed in a straight & unmeandering direction.

This is an overall good film. Although the direction & editing aren't the best, the performances, especially Melissa Leo's performance, are more than enough to elevate the film past those flaws.