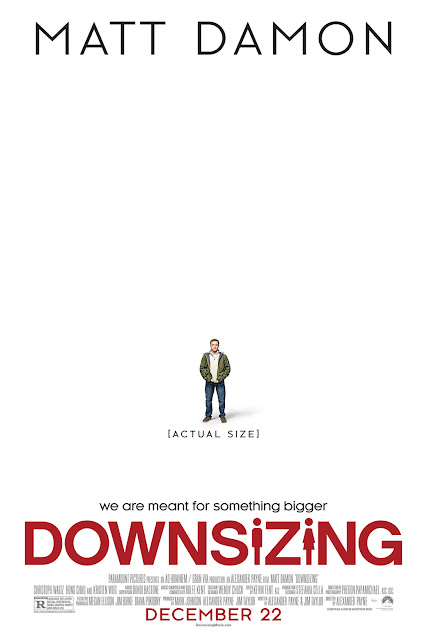 ★★★ - A Review by Cameron Kanachki


I'm a sucker for satires. Like satires, I also like poking fun at the shortcomings of the bad things in society & the world.

So when I first heard about Downsizing, the new film from Alexander Payne, who directed my favorite darkly comedic satire, 1999's Election, I was instantly sold. It had such a brilliant concept, & a great cast, & I was excited for it to come out.

And then I saw it, & I was disappointed, although I found it to be an ok film overall. Set in the near-future, the film follows Paul Safranek (played by Matt Damon), an occupational therapist for Omaha Steaks. He & his wife, Audrey (played by Kristen Wiig), have major financial issues.

One day, they go to their high school reunion, where they encounter their old friends, Dave (played by Jason Sudeikis) & Carol (played by Maribeth Monroe) Johnson, but there is something different about them. They have become smaller. Way smaller. WAY, WAY, WAY smaller. They have become this way due to the process of "downsizing," an irreversible procedure invented by Norwegian scientists 15 years earlier to help the environment that shrinks humans down to 5 inches. Although the environmental benefits are huge, Dave says the economical benefits are bigger, as your money goes farther when you're small.

So, Paul & Audrey decide to downsize & move to Leisureland, a popular small community. However, while Paul goes through with it, Audrey backs out at the last minute, & files for divorce, not wanting to be away from her parents & friends.

Now single, Paul tries to start anew in Leisureland, regretting his decision. His life is more stressful than he thought it would be. But after he attends a party hosted by his neighbor, Dusan Mirkovic (played by Christopher Waltz), he starts to fit in with his new surroundings.

The next day, still at Dusan's apartment, Paul meets Ngoc Lan Tran (played by Hong Chau), a Vietnamese political activist shrunk against her will by the Vietnamese government, & smuggled into the United States, losing a leg in the process. She is now Dusan's housecleaner. Paul then agrees to help Ngoc Lan help with the people she lives with in the slums of Leisureland. But more problems will arise to the surface.

The cast is great. Damon, Sudeikis & Wiig are good. Waltz is absolutely hilarious, fitting the role of an aging partyboy to a tee. And Chau is nothing short of phenomenal. Looking past her fake Vietnamese accent & fake broken English, there is a lot of emotion in her character.

Alexander Payne's direction is mediocre. His direction starts off great, but takes a bad turn halfway through as he tries to juggle the tonal shifts & new plot directions added on.

The screenplay by Alexander Payne & Jim Taylor is ok. The plot is great to start, but eventually, instead of answering our questions that need to be answered, it adds new stuff that didn't need to be there in the first place.

And Stefania Cella's production design is excellent. The sets of the small communities are so immersive & so brilliantly well-done.

This is a ok, although fairly disappointing film. The acting & visuals save the film. But would I ever downsize if I had the chance? Definitely not. There are just too many risks.

Downsizing was seen by me at the MJR Marketplace Digital Cinema 20 in Sterling Heights, MI on Friday, December 22, 2017. It is in theaters everywhere. Its runtime is 135 minutes, & it is rated R for language including sexual references, some graphic nudity & drug use.
at December 28, 2017