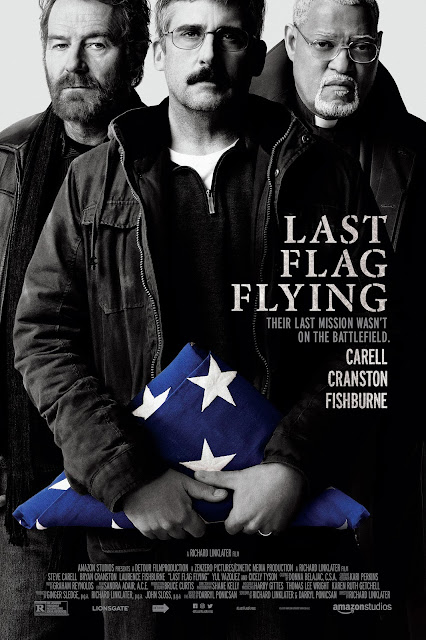 The Vietnam War. The Iraq War. What do these 2 wars have in common? The majority of American people believe that the United States shouldn't have been involved in either of those wars, & because of our involvement, hundreds of thousands died that shouldn't have died, & millions more have suffered irreperable mental & physical damage that they shouldn't have suffered.

While I was not alive during the Vietnam War, I was alive during the Iraq War. I remember, even when I was 4, the news reports coming out of the war. And I honestly do believe our involvement there should've never happened.

Last Flag Flying, while being a perfect mix of comedy & drama, also raises questions of our involvement in both of those wars, how do we help the veterans of the wars, & how we deal with the grief of losing a loved one in war. Based on the 2005 novel of the same name by Darryl Ponicsan, & set in December 2003, the film follows Larry "Doc" Shepherd (played by Steve Carell), a former Navy corpsman & Vietnam veteran living in Portsmouth, New Hampshire. He leaves his home & travels to Norfolk, Virginia to the bar of a Marine whom he served with in Vietnam, the foul-mouthed & cantankerous Sal Nealon (played by Bryan Cranston). Doc asks Sal to accompany him on the trip, to which Sal agrees, leaving the keys to his bar to the drunk guy asleep at the bar. They drive to a church, where thery discover another Marine they served with in Vietnam, Richard Mueller (played by Laurence Fishburne), now a pastor using a cane.

After going to Richard's house, Doc reveals his reason for the trip: earlier in the year, his wife died of breast cancer, & 2 days earlier, his son, Larry Jr., was killed in Iraq fighting heroically. His body will be transferred to Dover Air Force Base, where he will then be sent to Arlington National Cemetery to be buried. Richard is reluctant to join them at first, but he eventually agrees.

They head out to Dover, where they meet the strict Lt. Col. Willits (played by Yul Vazquez) & the young Lance Cpl. Charlie Washington (played by J. Quinton Johnson), who was with Larry when he died. Charlie reveals to Doc, Sal & Richard the truth about Larry Jr.'s death. Extremely disheartened & upset by the news, & also much to the chagrin of Lt. Col. Willits, Doc decides to not bury Larry Jr. at Arlington & decides to bury him next to his mother in Portsmouth, as he is sickened after being lied to by the military.

The 3 men, along with Charlie, leave by train to Portsmouth for Larry Jr.'s funeral & burial. But a haunting memory from their past leads Doc, Sal & Richard to take a detour & meet with the mother of a fellow Marine in Vietnam, Mrs. Hightower (played by Cicely Tyson). All of this raises questions about American values, the never-ending war machine, & above all, grief.

The cast is phenomenal. Steve Carell's performance is the finest of his career. Much like Casey Affleck's amazing performance last year in Manchester by the Sea, Carell is withdrawn at first, but begins to become more warm & even humorous as the film goes on. It is the best male performance of the year so far.

Cranston's performance is the finest of his film career so far. Cranston is a source of a lot of the amazing comic relief, & he uses his cantankerous attitude to amplify the humor. But he does reach back into drama, & he also does that extremely well here.

Fishburne's performance is one of the 3 best of his career, along with his performances in Boyz n the Hood & What's Love Got to Do with It. He is reserved at first, but as his long-controlled cantankerousness comes to the surface, his performance gets even better.

Richard Linklater's direction is excellent. Linklater, who is one of my favorite directors, has directed one of his best films yet, along with Before Sunrise, Before Sunset, Before Midnight, & Boyhood. Like those films, his direction is subdued & steady, exhuming a calm & cool atmosphere.

And the screenplay by Richard Linklater & Darryl Ponicsan is perfect. Linklater, known for his humanistic dialogue & characters, has excellently adapted Ponicsan's novel & made the characters even more human & deals with heavy topics while focusing on the humorous side of life for the characters. And when the script brings the humor, it really brings the humor, as it made me laugh like only a few other films have made me laugh in a while.

This is one of the 5 best films of the year so far. It has 3 amazing actors at the top of their game, & a director & screenwriter still at the top of his game.

Last Flag Flying was seen by me at the Maple Theater in Bloomfield Hills, MI on Friday, November 24, 2017. It is no longer in theaters in the Detroit area. Its runtime is 125 minutes, & it is rated R for language including some sexual references.
at December 07, 2017