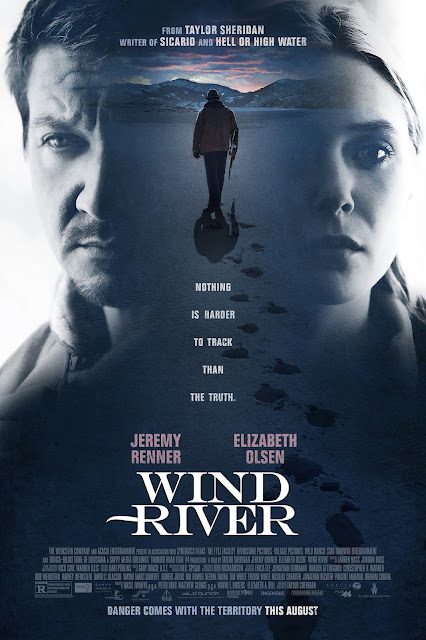 Taylor Sheridan has written some of the best films of the decade so far.

In 2015, he wrote the script for Denis Villeneuve's Sicario, one of the best crime films of the decade.

In 2016, he wrote the script for David Mackenzie's Hell or High Water, THE best crime film of the decade.

And now, in 2017, Taylor Sheridan has ended his Frontier Trilogy by not only being the screenwriter, but also making his directorial debut in Wind River, an absolute masterpiece.

The film focuses on Cory Lambert (played by Jeremy Renner), an agent of the U.S. Fish & Wildlife Service in Wyoming. He is separated from his Native American wife, Wilma (played by Julia Jones), with whom he has a son, Casey (played by Teo Briones).

One day, while hunting, Lambert discovers a body on the Wind River Indian Reservation. He discovers it is the body of 18-year old Natalie Hanson (played by Kelsey Asbille), the daughter of Martin Hanson (played by Gil Birmingham), a family friend. Her corpse is frozen, barefoot, without proper winter clothing, & has a blood stain on her groin.

After Tribal Officer Ben (played by Graham Greene) starts to investigate, FBI Agent Jane Banner (played by Elizabeth Olsen) comes in from Las Vegas to take over the investigation. She is the dictionary definition of a fish-out-of-water here, as she comes in wearing an FBI windbreaker, a pantsuit, & heels, eventually borrowing some winter clothing from a local resident.

The autopsy confirms Lambert's belief that Natalie died from a pulmonary hemorrhage after receiving blunt trauma & being raped; however, nothing confirms that she was murdered. Still steadfastly believing Natalie was murdered, Banner decides to stay & keep investigating, eventually asking Lambert to help find who murdered Natalie. But on one of the biggest Native American reservations in the country, nothing is easy to solve.

The cast is excellent. Jeremy Renner & Elizabeth Olsen give their best performances yet, & both deserve Oscar nominations. Gil Birmingham also further cements his status as one of the best (& most underrated) character actors in film.

Taylor Sheridan's direction is spectacular. After writing Sicario & Hell or High Water, Sheridan has gone behind the camera for this film. And what a directorial debut this is. This is the type of film you'd expect from a seasoned veteran director, not a first-timer. I expect Sheridan to keep making excellent films.

His screenplay is also spectacular. Like his screenplays for Sicario & Hell or High Water, it's filled with so many twists & turns that you don't see coming. He is slowly reinventing the thriller genre.

The cinematography by Ben Richardson is absolutely astounding. There are an abundance of breathtakingly beautiful shots of the desolate, mountainous, snowy landscape of the reservation & the areas surrounding it, & they are so perfectly put onto film by Richardson.

The editing by Gary D. Roach is amazing. The film doesn't feel rushed or drags on for too long. It's perfectly paced.

The sound design is incredible. From the sounds of the wilderness to the gunshots in the film, the sounds are absolutely perfect.

And the score by Nick Cave & Warren Ellis is amazing. It's absolutely haunting, & with this score, Cave & Ellis are making a name for themselves as some of the best film composers today.

This is, without a doubt, the best film of the year so far. It shines a light on the sad life of Native Americans on reservations, how many unsolved murders there are on reservations, & how we need to raise awareness of their plight.

Wind River was seen by me at the MJR Marketplace Digital Cinema 20 in Sterling Heights, MI on Tuesday, August 22, 2017. It is in theaters everywhere. Its runtime is 107 minutes, & it is rated R for strong violence, a rape, disturbing images, & language.
at August 30, 2017