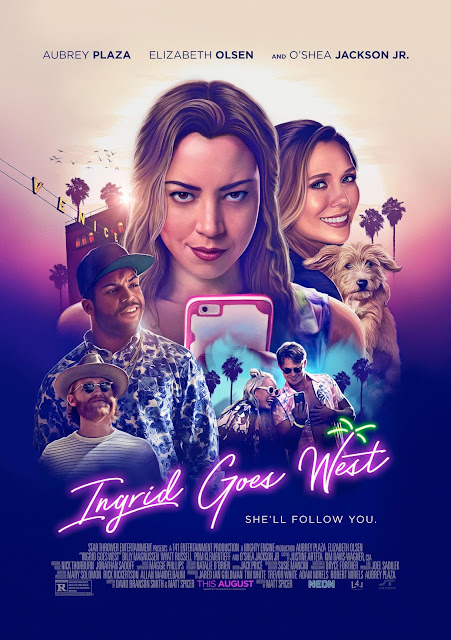 I hate the world I'm growing up in.

Ingrid Goes West gives us an amazing satirical look at the age of social media & how it has made us more disconnected from life. The film follows Ingrid Thorburn (played by Aubrey Plaza), an extremely mentally unstable woman from Pennsylvania. Ingrid has been reeling after her mother's death. After macing an ex-friend at her wedding for not inviting her, she is institutionalized. Ingrid is absolutely attached to one thing: Instagram.

Ingrid learns of Instagram icon Taylor Sloane (played by Elizabeth Olsen) while reading a magazine. She then follows her on Instagram, becoming jealous of her seemingly perfect life. She comments on one of her post & receives a reply from Taylor that most would deem inconsequential. Ingrid, however, becomes ecstatic at Taylor's reply. With the $60,000 from her mother's insurance policy, Ingrid decides to move to Los Angeles to become Taylor's friend. She rents a house in the neighborhood of Venice from Dan Pinto (played by O'Shea Jackson Jr.), an aspiring screenwriter & avid fan of Batman. Ingrid gets a makeover & decides to emulate Taylor's lifestyle.

Ingrid follows Taylor to her house & kidnaps her dog when she's not home, & returns her saying she found him during the night & kept him overnight. Taylor & her pop artist husband, Ezra (played by Wyatt Russell), invite Ingrid inside their house for dinner.

And at that moment, Ingrid & Taylor become friends. At last, Ingrid seems happy. But as their friendship grows, Ingrid becomes more unhinged, & as Taylor's narcissistic recovering drug addict brother, Nicky (played by Billy Magnussen) arrives with his friend, fashion blogger Harley Chung (played by Pom Klementieff), Ingrid arrives at a breaking point, wanting Taylor as her friend forever, no matter what the cost.

The cast is spectacular. Aubrey Plaza's performance is a revelation, & she gives the best performance of the year so far. She is extremely crazy in the film, & we are absolutely shocked at the depths her character goes to. Elizabeth Olsen & O'Shea Jackson Jr. also give excellent performances, providing strong supporting roles to Plaza.

Matt Spicer's direction is excellent. In his directorial debut, Spicer has an excellent satirical edge in his work.

And the screenplay by Matt Spicer & David Branson Smith is brilliant. The dialogue is scathingly funny, & we can't help but laugh at the people in the film for being such stuck-up snobs.

This is one of the best films of the year so far. It shows us how we have become basically connected to social media & how we are so obsessed with how people react to our daily lives & activities, & that the people we see on social media whose lives look so well-planned & perfect are actually just as screwed up as we are.