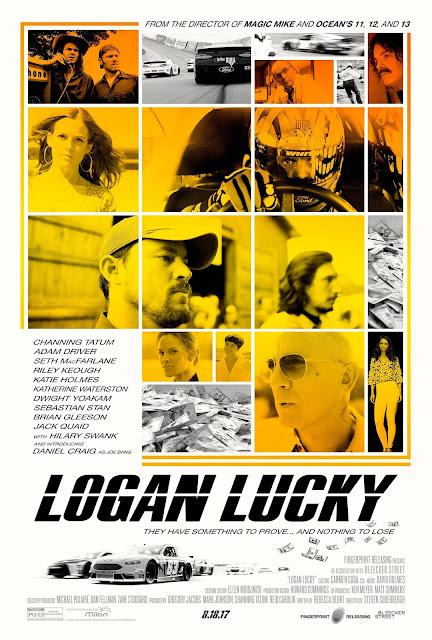 Logan Lucky is one of the more original films of the year, & it's certainly one of the funniest. The film focuses on Jimmy (played by Channing Tatum), Clyde (played by Adam Driver), & Mellie (played by Riley Keough) Logan, three siblings in Boone County, West Virginia. Jimmy is a laborer, Clyde is a bar owner, & Mellie is a hairdresser. Their family has been afflicted by a curse started by his great-grandfather wildly throwing a horseshoe during a game. Their aunt lost a lottery ticket, their uncle was struck by lightning, Jimmy's football career ended after blowing out his knee, & Clyde lost his left arm in Iraq (not in battle, but on the way to the airport after being discharged), forcing him to wear a prosthetic arm below his elbow. However, Mellie has been unafflicted by the curse, & doesn't believe in it at all.

Jimmy is fired as a construction worker at Charlotte Motor Speedway for having a limp which he failed to disclose, & is considered by the insurance company as a pre-existing condition. He then goes to pick up his daughter, Sadie (played by Farrah McKenzie) for a beauty pageant from the home of his ex-wife, Bobbi Jo Logan-Chapman (played by Katie Holmes). Bobbi Jo tells Jimmy that since her new wealthy husband, Moody Chapman (played by David Denman) is opening up a new car dealership in Lynchburg, Virginia, they are moving there, which makes it hard for Jimmy to visit Sadie.

Disgruntled by the news, Jimmy goes to Clyde's bar, where they encounter Max Chilblain (played by Seth MacFarlane), an arrogant British businessman & NASCAR owner & sponsor of NASCAR driver Dayton White (played by Sebastian Stan). After Chilblain insults Clyde, Jimmy & Chilblain get into a fight, which ends when Jimmy sets Chilblain's car on fire with a Molotov cocktail. On the way out, Jimmy yells the word "cauliflower" to Clyde, "cauliflower" being a codeword from when Jimmy & Clyde used to commit small crimes.

Jimmy has come up with an idea to rob Charlotte Motor Speedway. Since he helped construct it, Jimmy knows that the money is moved using a pneumatic tube transport system. Although Clyde is adamant that his days of crime are over, he agrees to partner with Jimmy. Mellie also joins in on the robbery.

Jimmy & Clyde then recruit Joe Bang (played by Daniel Craig), an infamous explosives expert currently "in-car-ce-ra-ted" at a prison led by the notorious Warden Burns (played by Dwight Yoakam). After planning to break him out (& eventually put Clyde in prison as well), Jimmy & Clyde are then sent to recruit Joe's extremely unintelligent brothers, Sam (played by Brian Gleeson) & Fish (played by Jack Quaid).

Before the robbery, Jimmy becomes smitten with Sylvia Harrison (played by Katherine Waterston), a physician's assistant who went to high school with Jimmy. But with FBI Agent Sarah Grayson (played by Hilary Swank) on their tail, the Logans & the Bangs all try to cover the tracks while trying to break the family curse that has plagued the Logans for years.

The cast is spectacular. Tatum, Driver, MacFarlane & Keough are excellent, but the greatest performance here is given by Daniel Craig. Craig, most well known for his portrayal of James Bond in the James Bond films, is cast way against type here as a delightfully crazy explosives expert. HE deserves at least an Oscar nomination for this.

Steven Soderbergh's direction is excellent. Having been out of the game since 2013's Behind the Candelabra, has returned with a vengeance.

The cinematography by Steven Soderbergh (under the name of Peter Andrews) is excellent. There are a lot of excellent shots in the film, & Soderbergh has proved he can shoot a film just as good as he can direct a film.

The editing by Steven Soderbergh (under the name of Mary Ann Bernard) is amazing. There are a lot of montages in the film, & those are edited to perfection.

This is one of the best films of the year so far. It's an absolutely welcome return to filmmaking for Steven Soderbergh. I sincerely hope he doesn't go back into retirement after this.

Logan Lucky was seen by me at the MJR Marketplace Digital Cinema 20 in Sterling Heights, MI on Saturday, August 19, 2017. It is in theaters everywhere. Its runtime is 119 minutes, & it is rated PG-13 for language & some crude comments.
at August 28, 2017