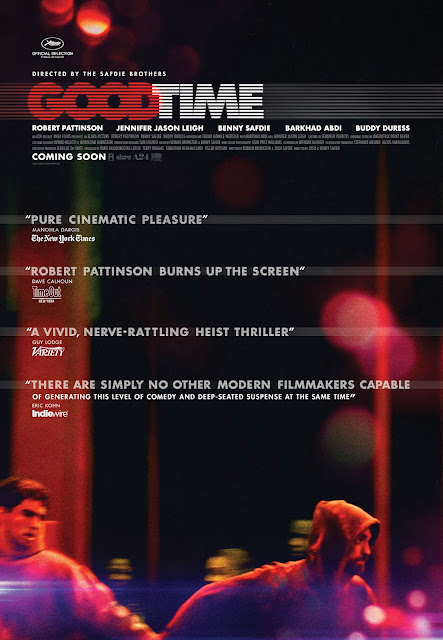 After watching 2 of the Twilight films a long time ago, I was convinced he didn't have a single ounce of acting ability in his body.

I was wrong. I mean, I was REALLY wrong.

Good Time, an excellent crime film, has shown me how great of an actor Robert Pattinson is. The film focuses on Connie Nikas (played by Robert Pattinson), a bank robber in New York. His brother, Nick Nikas (played by Benny Safdie), is extremely mentally handicapped. After robbing a bank for $65,000, Connie & Nick try to get away, but a pack of red dye goes off in the getaway car, forcing them to flee.

Two police officers spot them; Connie remains calm, but Nick freaks out & runs, forcing the cops to chase them. Connie succesfully evades the cops, but Nick is arrested & held at Rikers Island.

Connie tries to bail him out, but he is $10,000 short, & Connie's girlfriend, Corey (played by Jennifer Jason Leigh), is unsuccessful at using her credit cards to cover the $10,000. He later finds out Nick is in a hospital after being beaten unconscious in a fight. All of this leads to a wild & crazy night involving Ray (played by Buddy Duress), a recent parolee; Dash (played by Barkhad Abdi), an amusement park security guard); & Crystal (played by Taliah Webster), a 16-year-old girl.

The cast is excellent. As I mentioned before, Robert Pattinson is nothing short of spectacular in this film. He has proven me dead wrong with this performance. Also, Benny Safdie is excellent in giving a mentally handicapped portrayal without coming off as unintentionally hilarious or heavy-handed.

The direction by Benny & Josh Safdie is amazing. They have brought an extreme amount of wild thrills to this film unlike many other crime films in recent memory.

The screenplay by Josh Safdie & Ronald Bronstein is brilliant. The dialogue is excellent, & the story is excellently written.

The cinematography by Sean Price Williams is amazing. Every single shot has a lot of flair to it, especially one shot of a car speeding down a street, reminding us of a helicopter TV camera zooming out on a car chase.

And the score by Oneohtrix Point Never is absolutely astounding. The synthesizer-led score drives the entire film, & it is what helps keep the film so thrilling.

Good Time was seen by me at the MJR Marketplace Digital Cinema 20 in Sterling Heights, MI on Thursday, August 24, 2017. It is in theaters everywhere. Its runtime is 100 minutes, & it is rated R for language throughout, violence, drug use & sexual content.
at August 30, 2017