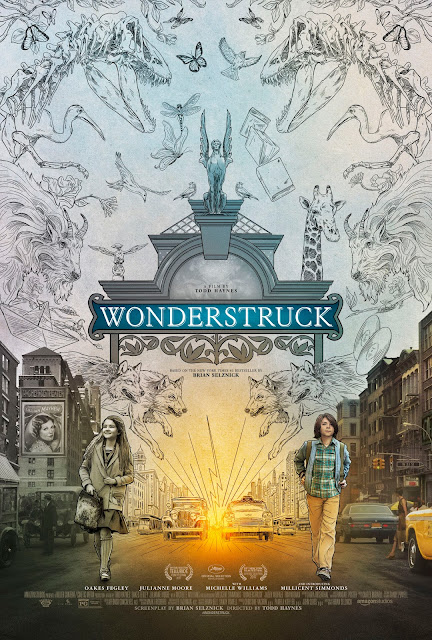 Wonderstruck is an effervescent masterpiece of ethereal beauty that will touch every single part of you like you've never imagined.

In 1927 Hoboken, New Jersey, Rose Kincaid is a deaf girl being kept at home by her father, being taught by her tutor to lip read & mouth words. Disillusioned with her life, she flees to New York City to find her idol, actress Lillian Mayhew (played by Julianne Moore). Once she gets there, she'll realize more than she could've imagined.

In 1977 Gunflint Lake, Minnesota, Ben Wilson is a boy reeling from the death in a car accident of his librarian mother, Elaine Wilson (played by Michelle Williams). One night, while rummaging through some stuff, Ben finds a bookmark with a number to a bookstore in New York, with a note written to Elaine on the back of it. When he calls that number, lightning strikes the house, sending electricity to the phone cord, electrocuting Ben, rendering him deaf in both ears. At the hospital, he sneaks out & sets out for New York to find his father.

Eventually, these 2 timelines will join together piece by piece.

The cast is spectacular. Simmonds & Fegley give some of the best child performances in a long time. Williams is great in her short runtime. And Moore is amazing as always.

Todd Haynes's direction is excellent. Haynes forms a calm, uncynical atmosphere & it is done so well. Also, I commend Haynes for his use of subtitles throughout the entire film for the deaf community.

Brian Selznick's screenplay is amazing. Selznick has adapted his novel so perfectly, & has shown that he can write screenplays as well as he can write books.

Edward Lachman's cinematography is nothing short of stunning. From the black-&-white world of 1927, to the grainy, gritty world of 1977, every shot is perfect.

Affonso Gonçalves's editing is excellent. It's methodically slow, & both of the timelines flow into one another almost seamlessly.

Sandy Powell's costume design is amazing. The costumes, especially in 1927, are definitely accurate for the times.

Mark Friedberg's production design is absolutely stunning. The sets are so immersive, especially the period-accurate sets in 1927.

The sound design is incredible. The silent dialogue of 1927 & the muffled sounds of Ben's hearing in 1977 are just so incredibly well-done.

And Carter Burwell's score is absolutely beautiful. His quiet & meditative piano drives the film, & enhances the mood of the film.

This is one of the best films of the year. It's awe-inspiring & absolutely beautiful.