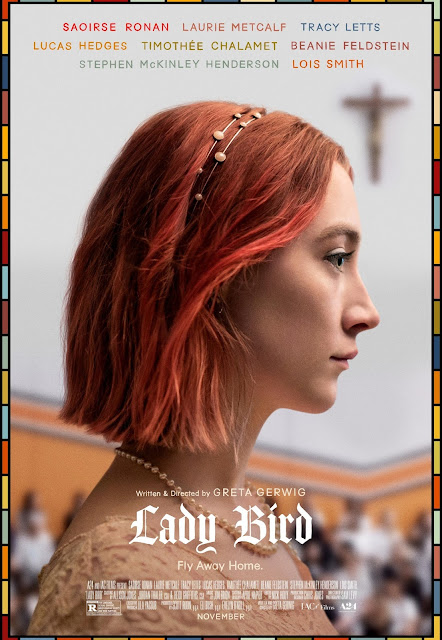 
High school is the roughest 4 years you will ever go through in your life. From the first loves & other great moments, to the heartbreaks, fights, & mood swings, high school is an emotional rollercoaster. Besides this, outside of school, this is the time where you yearn to finally go away & get away from your hometown, & the time where you have so many fights with your parents about your life & your decisions. From 14-18, it's rough, especially as you get closer to college.

Lady Bird has captured this time in your life so perfectly. It has portrayed adolescence so honestly unlike any other film has in history. Set during the 2002-2003 school year, the film follows Christine "Lady Bird" McPherson (played by Saoirse Ronan), a senior at a Catholic high school in Sacramento, California, AKA "The Midwest of California." She's brutally honest, & wants nothing more than to get out of her hometown & go to college on the East Coast, where culture is.

Lady Bird spends her days either confiding in her best friend, Julie Steffans (played by Beanie Feldstein), or quarreling with her mother, Marion (played by Laurie Metcalf), who is struggling to pay the bills after her husband, Larry (played by Tracy Letts), was fired from his job. She also fights with her older, adopted brother, Miguel (played by Jordan Rodrigues), who still lives with Lady Bird & their parents, along with his girlfriend, Shelly (played by Marielle Scott).

At school, Lady Bird & Julie end up getting parts in the school's production of Merrily We Roll Along, directed by the clinically depressed Father Leviatch (played by Stephen McKinley Henderson). This is where Lady Bird meets Danny O'Neill (played by Lucas Hedges), an absolutely too-perfect thespian. She becomes attracted to him, & also becomes attracted to Kyle Scheible (played by Timothée Chalamet), an anarchistic dirtbag who is the perfect representation of that one kid in your economics class who likes reading Kurt Vonnegut & hates economics in any way. Lady Bird also becomes friends with Jenna Walton (played by Odeya Rush), a preppy rich girl.

Still, Lady Bird wants nothing more to get out of Sacramento, as she applies to colleges on the East Coast behind her mother's back. But one meeting with Sister Sarah Joan (played by Lois Smith), the principal of the school, may just change Lady Bird's idea of Sacramento, & by extension, her relationships with her friends & family.

The cast is nothing short of spectacular. Saoirse (pronounced SER-sha) Ronan, my favorite actress, has never been better than she has been here. With that dark red-dyed hair & the acne, Ronan looks exactly like a normal teenager. And she brings so much energy & heart to the role that it's impossible to not be amazed by her performance.

Laurie Metcalf is also spectacular. She also brings a lot of emotion to the role, especially in one scene where your heart will absolutely break into a million pieces. And she has so much chemistry with Saoirse Ronan that it feels like you're watching an actual mother & daughter interacting with each other.

Tracy Letts is also spectacular. Letts, most known for his playwriting, has given his best performance yet. Letts portrays a non-confrontational attitude so perfectly.

Beanie Feldstein is an absolute scene-stealer. She manages to light up the screen every scene she's in & becomes a hilarious counterpart to Ronan. This is the breakout female role of the year, proving that she will definitely make a name for herself & not just be referred to as "Jonah Hill's little sister."

The rest of the cast, especially Lucas Hedges & Timothée Chalamet, is also spectacular, making such indelible impressions on the audience.

Greta Gerwig's direction is phenomenal. Gerwig, who has already made a name for herself as an amazing actress (& definitely one of my favorites, in films like Frances Ha, Mistress America & 20th Century Women), has gone behind the camera here for her solo directorial debut (she co-directed 2008's Nights & Weekends with Joe Swanberg). And it definitely doesn't feel like a debut. She directs the film with so much heart & tenacity that it feels like it's come from a seasoned veteran, not a debuting director.

Greta Gerwig's screenplay is a sheer work of art. Gerwig, who has also co-wrote Frances Ha & Mistress America with Noah Baumbach, has taken the atmosphere & style of those scripts & brought them here, & has elevated them to even greater heights. The dialogue feels so real, & the characters feel so relatable & real.

Sam Levy's cinematography is wondrous. From the many wide shots to the lighting to the color palette, Levy makes this film into a visual work of art as well.

Nick Houy's editing is excellent. It is perfectly paced, flowing flawlessly at a fast pace, & it knows where it's going for all 94 minutes.

And Jon Brion's score is amazing. The score is driven by guitars & pianos & clarinets, perfectly supplementing the emotions of the film.

This is, without a doubt, the best film I've ever seen. Every inch of it feels so true & honest & real, & I can't imagine a better film. Also, to the moms reading this, if you have a daughter in high school, take her to see this. Also, after you do see this, call your mom & tell her you love her. You probably will anyway after seeing this, but I'm just reminding you.

Lady Bird was seen by me at The Maple Theater in Bloomfield Hills, MI on Saturday, November 18, 2017. It is in theaters everywhere. Its runtime is 94 minutes, & it is rated R for language, sexual content, brief graphic nudity, & teen partying.
at November 23, 2017