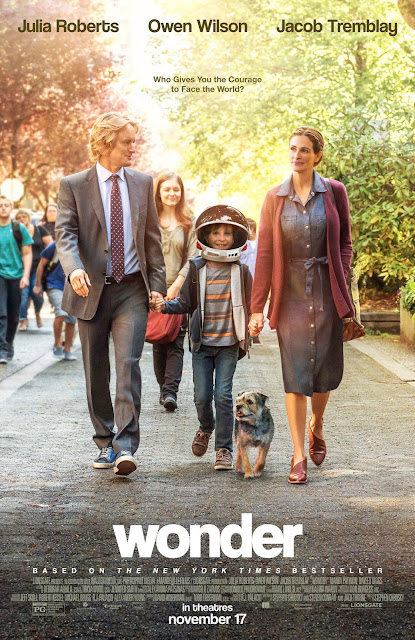 
Lately, most films based on young adult books have been, for the most part, absolute drivel, with not a single amount of good acting, direction, or screenwriting to be found anywhere.

So, obviously, because of this, I was very skeptical of Wonder, the film based of R.J. Palacio's 2012 novel of the same name. Even though it did have Stephen Chbosky, the writer & director of 2012's coming-of-age masterpiece The Perks of Being a Wallflower, co-writing & directing the film, I was still skeptical because of the possibility that it may be too emotionally manipulative.

The film focuses on August "Auggie" Pullman (played by Jacob Tremblay), a 10-year-old boy. Auggie is like most 10-year-old boys, except for one thing: Auggie has mandibulofacial dystosis, an extremely rare facial deformity. Due to this, Auggie has been homeschooled for his school life. After careful consideration, his parents, Isabel (played by Julia Roberts) & Nate (played by Owen Wilson) have decided to enroll him at Beecher Prep in Manhattan for middle school, citing the fact that everyone will be new there. His older sister, Via (played by Izabela Vidovic), also assures Auggie of this.

Befoe the school year starts, the principal of Beecher Prep, Mr. Tushman (played by Mandy Patinkin), has 3 students show Auggie around the school. These 3 students are: Jack Will (played by Noah Jupe), who will become Auggie's best friend; Julian Albans (played by Bryce Gheisar), a stuck-up bully; & Charlotte Cody (played by Elle McKinnon), a self-absorbed kid bragging about her appearances in commercials.

As the school year goes on, Auggie makes more friends, including Summer (played by Millie Davis), & finds that people are just cruel for no reason, & Auggie tries to get through his first school year, with the help of his friends, family, & teachers, including his inspiring homeroom teacher, Mr. Browne (played by Daveed Diggs).

Stephen Chbosky's direction is superb. It's perfectly subdued, just like his direction for The Perks of Being a Wallflower, & that subdued approach is a great fit for this film.

The screenplay by Stephen Chbosky, Steve Conrad & Jack Thorne is amazing. They have adapted an excellent novel so faithfully, probably more faithfully than any novel in the past few years that I've read.

And the makeup & hairstyling is phenomenal. It makes Jacob Tremblay look completely unrecognizable as Auggie.

This is one of the best young adult novel film adaptations of the past decade. It remains completely faithful to the book, & it has some amazing performances.

Wonder was seen by me at the MJR Marketplace Digital Cinema 20 in Sterling Heights, MI on Saturday, November 18, 2017. It is in theaters everywhere. Its runtime is 113 minutes, & it is rated PG for thematic elements including bullying, & some mild language.
at November 23, 2017