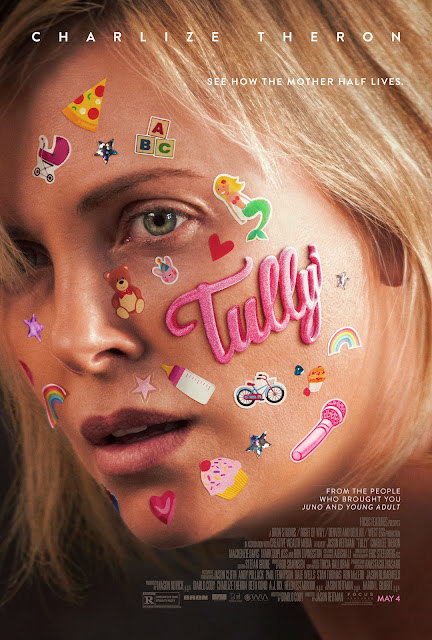 
The beginning stages of motherhood can be a difficult time. You keep asking yourself whether or not you're doing the best you can as a mother. Eventually, you figure things out as you continue on the journey centered on the loving bond between you & your child.

Tully, while somewhat flawed, is a often funny & heartwarming ode to motherhood. The film follows Marlo (played by Charlize Theron), a mother of two children, with a third on the way. Her daughter, Sarah (played by Lia Frankland), is precocious for her age, while her son, Jonah (played by Asher Miles Fallica), has a developmental disorder. Her husband, Drew (played by Ron Livingston), when he's not working, spends his time playing video games.

When Marlo, Drew & the kids go have dinner with her more well-off brother, Craig (played by Mark Duplass) & his wife & kids, Craig suggests to Marlo that she should hire a night nanny, who would take care of the baby while Marlo gets some sleep. Marlo declines the offer, saying it would be awkward having a complete stranger in the house.

After Marlo gives birth to a baby girl named Mia, she quickly becomes depleted. Desperate, she decides to hire a night nanny.

This brings us to Tully (played by Mackenzie Davis). She's a 26-year-old free spirit that is wise beyond her years. Marlo is completely fascinated by her. Although it is odd at first, together, they embark on an eye-opening friendship.

The cast is superb. Charlize Theron gives one of her best performances. Theron is almost unrecognizable here, having gained 50 pounds for the role. We don't see Charlize Theron. We see Marlo. We see a real-life mother.

Mackenzie Davis is also fantastic. Davis exudes a lot of charisma in her performance, & her chemistry with Theron is top-notch.

Jason Reitman's direction is great. Although his direction does falter a bit near the end, it does pick itself up quickly enough to go back to the steady hand that was shown during the first 2/3 of the film. Reitman, like he did with Juno, adds a lot of heart to his direction, & keeps the film from becoming cynical.

And Diablo Cody's screenplay is excellent. Cody's knack for sharp dialogue continues here, & the screenplay deals with themes of motherhood so excellently, & makes it feel so fresh.

This is a great comedy-drama. Although it isn't perfect, it does have some great performances from Charlize Theron & Mackenzie Davis, along with a terrific screenplay from Diablo Cody to make this film more than worthwhile.

Tully was seen by me at the MJR Partridge Creek Digital Cinema 14 in Clinton Township, MI on Saturday, May 5, 2018. It is in theaters everywhere. Its runtime is 95 minutes, & it is rated R for language & some sexuality/nudity.
at May 16, 2018