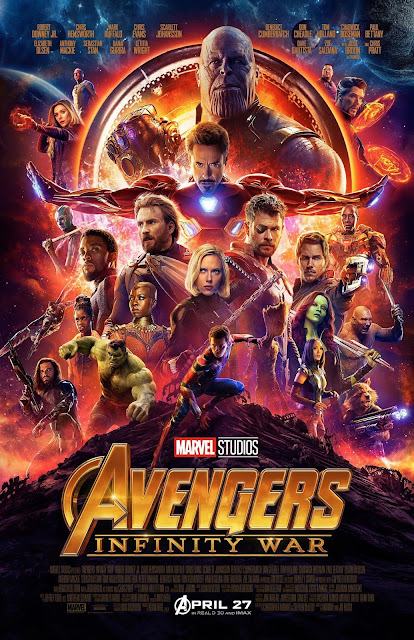 
Since the Marvel Cinematic Universe started in 2008 with Iron Man, it has become a global box office juggernaut, raking in $15.5 billon at the box office, becoming the highest-grossing film series in history, with The Avengers leading the way with $1.5 billion. Although there have been a couple mediocre films in the MCU (The Incredible Hulk & Thor: The Dark World), the vast majority of films have ranged from good to excellent.

Avengers: Infinity War has been teased as the culmination of what the MCU has been building towards for 10 years. Every single minute has all been going towards this. For the first time, we've been able to see almost every single character from the MCU that we know & love on the big screen.

As a huge Marvel fan, ever since the first trailer for this dropped, I was absolutely hyped for this. And when the second trailer dropped, I was even more ecstatic. But I had a sinking feeling in the back of my mind that it wouldn't be as good as I hoped (& this was compounded by my sky-high expectations for the film). But when reviews started to trickle in, the vast majority of them being very positive, I started to breathe a little easier. And when I sat down in the theater to watch the film, in a huge packed theater on a Friday afternoon, I couldn't have been more excited.

It didn't meet my expectations. It surpassed them far more than I thought they could. It was everything I ever wanted a superhero film to be, & then some. It's definitely my favorite MCU film. Once again, the film follows our favorite group of superheroes, The Avengers: Tony Stark, AKA Iron Man (played by Robert Downey Jr.); Thor (played by Chris Hemsworth); Bruce Banner, AKA Hulk (played by Mark Ruffalo); Steve Rogers, AKA Captain America (played by Chris Evans); & Natasha Romanoff, AKA Black Widow (played by Scarlett Johansson).

Bruce is sent to Earth through the Bifrost after an attack by Thanos (played by Josh Brolin) on a ship filled with Asgardian citizens, & lands in the Sanctum Santorum in New York, where Dr. Stephen Strange, AKA Doctor Strange (played by Benedict Cumberbatch) & Wong (played by Benedict Wong) stays & helps protect the world from other dimensional villains. Bruce alerts Strange, Wong & eventually Tony that Thanos is coming in his quest to receive the 6 Infinity Stones: the Power Stone; the Space Stone; the Reality Stone; the Soul Stone; the Time Stone; & the Mind Stone. If Thanos gets all 6 Infinity Stones, he can complete his plan with the snap of his fingers: the killing of half of the life in the universe.

Soon after, 2 of Thanos's children arrive in New York: Ebony Maw (played by Tom Vaughan-Lawlor) & Cull Obsidian (played by Terry Notary). Noticing this, Peter Parker, AKA Spider-Man (played by Tom Holland), gets out of his school bus & joins Tony, Strange, Wong, & Bruce (who is having trouble becoming the Hulk) in the fight.

Not long after that, Thanos's 2 other children arrive in Scotland: Proxima Midnight (played by Carrie Coon) & Corvus Glaive (played by Michael James Shaw). They ambush Wanda Maximoff, AKA Scarlet Witch (played by Elizabeth Olsen) & Vision (played by Paul Bettany), in order to get the Mind Stone, which is in Vision's head. Steve, Natasha, & Sam Wilson, AKA Falcon (played by Anthony Mackie) stop this & take Wanda & Vision to the Avengers Compound, where James Rhodes, AKA War Machine (played by Don Cheadle) & Bruce are staying. Eventually, they travel to Wakanda, the home of T'Challa, AKA Black Panther (played by Chadwick Boseman), who is being helped mainly by Okoye (played by Danai Gurira) in advance of Thanos's arrival. T'Challa's sister, Shuri (played by Letitia Wright), might be able to help separate the Mind Stone from Vision & protect it from Thanos. Also, Steve's old friend, James "Bucky" Barnes, AKA Winter Soldier (played by Sebastian Stan) is recuperating in Wakanda, & is able to help fight Thanos.

Meanwhile, the Guardians of the Galaxy: Peter Quill, AKA Star-Lord (played by Chris Pratt); Gamora (played by Zoe Saldana); Drax (played by Dave Bautista); Mantis (played by Pom Klementieff); Rocket (voiced by Bradley Cooper); & Groot (voiced by Vin Diesel) receive a distress signal & find Thor, who immediately becomes the talk of the town on the ship, much to Peter's chagrin. Thor believes Thanos is heading to Knowhere for the Reality Stone, & sends Peter, Gamora, Drax & Mantis to Knowhere, while Thor, Rocket & Groot travel to Nidavellir, where Eitri (played by Peter Dinklage) might be able to help build an axe for Thor that can kill Thanos.

Eventually, all of these people join together to fight Thanos, but as he is the most powerful villain they will most likely ever face, sacrifices may have to be made.

The cast is spectacular. Downey Jr., Evans, Hemsworth, Pratt, Ruffalo, Johansson, Boseman, Olsen & Holland are the standouts of the heroes. But Josh Brolin is the standout of the entire cast. Brolin, using motion-capture, is absolutely terrifying, & along with the characterization, makes Thanos not only the best villain of the MCU, but one of the best villains in comic book film history.

The direction by Anthony & Joe Russo is excellent. The Russo brothers manage to juggle so many characters & so many themes so excellently it feels like a Herculean feat has been completed.

The screenplay by Christopher Markus & Stephen McFeely is amazing. The plot is interesting, the characters are well-written (especially Thanos), & the story is well-crafted & doesn't pull any emotional punches.

Trent Opaloch's cinematography is astounding. Opaloch uses a vast variety of wide shots, & a eclectic color palette, a far cry from the ugly gray color palette that was a plague to some previous MCU films.

The editing by Jeffrey Ford & Matthew Schmidt is stellar. There are no distracting cuts that are commonplace in action films, & the pacing is excellent, making the film's 149-minute runtime feel like a breeze.

Charles Wood's production design is phenomenal. Like the cinematography, the sets are colorful & vibrant, & pops out at every second.

Alan Silvestri's original score is fantastic. Silvestri has always been a great thematic composer, & that's put to excellent use here, with a fantastic orchestral array leading the way.

The sound design is incredible. The sounds are loud, but never distracting. They add to the intense feel of what's at stake in the film.

This is one of the best films of the year, & one of the best comic book films ever. Led by some fantastic performances (especially from Josh Brolin), excellent direction, an amazing screenplay, breathtaking visuals, & a stellar score from Alan Silvestri, this is a cinematic event for the ages.

Avengers: Infinity War was seen by me at the MJR Partridge Creek Digital Cinema 14 in Clinton Township, MI on Friday, April 27, 2018. It is in theaters everywhere. Its runtime is 149 minutes, & it is rated PG-13 for intense sequences of sci-fi violence & action throughout, language & some crude references.
at May 15, 2018