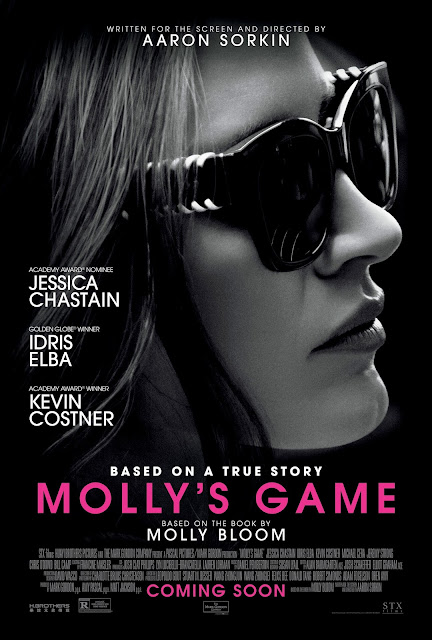 
Aaron Sorkin is one of the most brilliant storytellers of his time. With his rapid-fire dialogue, the "walk-&-talk", & the breakneck editing, Sorkin has created a style that is all his own.

He has now gone behind the camera for his directorial debut, Molly's Game, & what a directorial debut it is. It's thrilling, exciting, & running a mile a minute. Based on the 2014 autobiography of the same name by Molly Bloom, the film follows Molly Bloom (played by Jessica Chastain), a former competitive skier, until she suffered an injury in the qualifiers for the 2002 Winter Olympics in Salt Lake City. From her youth, she had a fiercely competitive streak, like her brothers, & she used the fierceness a lot towards her father, Larry (played by Kevin Costner).

She then moves to Los Angeles, instead of going to law school as planned. At her new job, her boss, Dean Keith (played by Jeremy Strong), introduces her to the world of underground poker in Los Angeles, which she eventually parlays that into her own poker game. Attending her poker games are some of the elites, & some who definitely aren't so elite. Most notable are the unlucky Brad (played by Brian D'Arcy James), the headstrong Harlan Eustice (played by Bill Camp), & the cunning actor known as Player X (played by Michael Cera), a supposed amalgamation of Leonardo DiCaprio, Ben Affleck & Tobey Maguire.

When this game falters out, Molly then heads out to New York, & starts up a new game where the stakes get even higher for her. The players include Douglas Downey (played by Chris O'Dowd), who introduces Molly to the Russian mob out of Brighton Beach. This only heightens the stakes for Molly, who decides to start taking a rake from the games.

This leads the FBI to arrest her, seizing the money earned from the games. She then gets lawyer Charlie Jaffey (played by Idris Elba) to represent her in court. Jaffey is considered by Molly to be "the only lawyer who isn't shady." Now, Jaffey must try to work out a deal with Molly to get her to work out a deal with the FBI, but Molly doesn't want the last thing she has to be sullied: her name.

Aaron Sorkin's direction is phenomenal. Sorkin makes every moment of this film thrilling, proving he is as great a director as he is a screenwriter.

Aaron Sorkin's screenplay is brilliant. Sorkin's dialogue, much like the dialogue of his other films, fires at all cylinders, going faster than the cars at a NASCAR race.

And the editing by Alan Baumgarten, Elliot Graham & Josh Schaeffer is excellent. Much like other films written by Sorkin, the editing uses so many quick cuts to perfection, making the film's 140-minute runtime feel like a breeze.

This is one of the 10 best films of the year. Featuring excellent performances from Jessica Chastain & Idris Elba, along with another brilliant screenplay from Aaron Sorkin, this proves to be a phenomenal directorial debut for Aaron Sorkin.