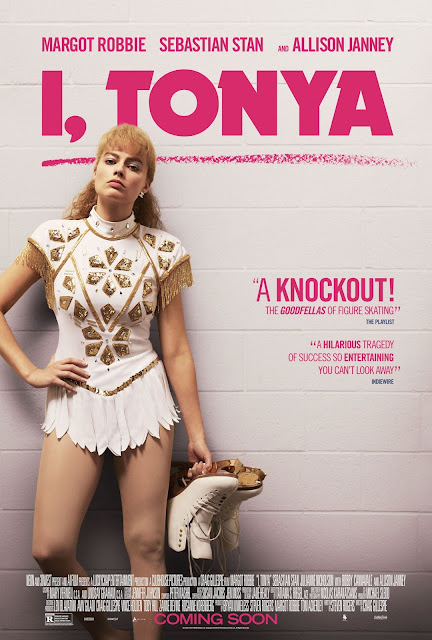 I, Tonya, while slightly focusing more on Tonya Harding's life than on the incident, is a darkly funny, sometimes disturbing, & overall brilliant depiction of the life of one of America's greatest figure skaters along with her involvement in one of the craziest events in human history. Told through interviews & 4th-wall breaks, the film follows Tonya Harding (played as a teenager & an adult by Margot Robbie, & as a child by Mckenna Grace), a budding figure skater. Raised by her absolutely cruel mother, LaVona (played by Allison Janney), Tonya starts skating at the age of 4, & with the help of her coach, Diane Rawlinson (played by Julianne Nicholson), she hones her skills that are rarely seen in figure skating.

Time passes, & Tonya is now 15, brace-faced, with a bad hairstyle, & with almost none of the elegantly feminine qualities embraced by figure skating. However, one person becomes smitten with her: Jeff Gillooly (played by Sebastian Stan). Over the next few years, Tonya moves out of her mother's house & marries Jeff. However, the love between them doesn't last for long; Jeff becomes abusive towards Tonya, even more abusive then her mother.

Over the next few years, Tonya fires Diane & hires Dody Teachman (played by Bojana Novakovic) as her new coach, becomes the first American woman to complete a triple axel, the winner at the 1991 U.S. Figure Skating Championships, the runner-up at the 1991 World Figure Skating Championships, & eventually, the fourth-place finisher at the 1992 Winter Olympics in Albertville, France. She returns home, suffers more abuse, & divorces Jeff.

Tonya receives a death threat & is forced to not skate for a couple months. In order to get back at whom they believe to be behind the death threat, Tonya, Jeff, & her bodyguard, Shawn Eckhardt (played by Paul Walter Hauser) decide to mail some threats to Nancy Kerrigan (played by Caitlin Carver) to get back at her. However, Tonya eventually decides to not take part in it.  However, Jeff & Shawn take matters to the next level: take Nancy out of the Figure Skating Championships &, in turn, out of the upcoming Winter Olympics in Lillehammer, Norway by hiring Shane Stant (played by Ricky Russert) & Derrick Smith (played by Anthony Reynolds) to break her knee during practice at the Championships in Detroit, without Tonya's knowledge.

After the attack, Tonya is crucified by the media, including Hard Copy producer Martin Maddox (played by Bobby Cannavale). Her life, along with the lives of Jeff & Shawn, will never be the same.

The cast is phenomenal. Margot Robbie gives her greatest performance yet, disappearing into her role. And it's an absolute transformation, where you don't see Margot Robbie, but you see Tonya Harding. She deserves an Oscar nomination for Best Actress.

Sebastian Stan is both hilarious & disturbing. As Jeff Gillooly, he is both hilariously dumb & extremely abusive, scaring you at every moment. He deserves an Oscar nomination for Best Supporting Actor.

But the scene-stealer of the film is Paul Walter Hauser. Hauser, an unknown actor from Grand Rapids, MI, is absolutely gut-bustingly hilarious as Shawn Eckhardt. His delusions of grandeur are so hilarious. He also deserves an Oscar nomination for Best Supporting Actor.

Craig Gillespie's direction is phenomenal. After directing 2007's Lars & the Real Girl & 2016's The Finest Hours, Gillespie has directed his best film yet. Gillespie creates a tense, darkly funny atmosphere that sticks throughout the entire film.

Steven Rogers's screenplay is brilliant. Rogers writes such brilliant dialogue, & creates such absolutely interesting characters. Also, Rogers deals with themes such as abuse, the way media skewers the truth, & the way we view women so brilliantly. Furthermore, it tells the truth about the story of Tonya Harding, which hasn't been very well-told until now.

Tatiana S. Riegel's editing is excellent. Riegel takes a lot of cues from Scorsese's long-time editor, Thelma Schoonmaker, with the uses of quick cuts. And Riegel executes them as well as Schoonmaker does.

Jennifer Johnson's costume design is amazing. Johnson has created figure skating costumes that are so realistic & accurate, along with the costumes worn by Tonya Harding that are of a lesser economic fashion.

Jade Healy's production design is fantastic. The sets are extremely realistic for skating arenas & practice rinks, & that's attributable to Healy's past as a figure skater.

And the soundtrack is killer. Featuring songs such as Chicago's 25 or 6 to 4, Siouxsise & the Banshees's The Passenger, & Laura Branigan's Gloria, the soundtrack has so many amazing songs.