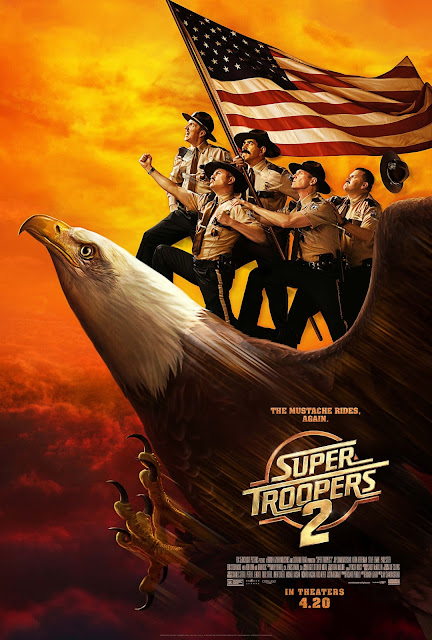 I'm definitely not the biggest fan of stupid humor. I mean, I hate most of Adam Sandler's comedies since 2011, even though I haven't seen the majority of them. They're just tired, PG-13 jokes that are just gross. However, I like stupid humor when it's done well. Kevin Smith's films, including Clerks, Mallrats & Jay & Silent Bob Strike Back, are prime examples of stupid humor done well.

Super Troopers 2, while not as great as the first, is still a very hilarious & well-done sequel that is way better than any comedy sequel deserves to be. The film follows our favorite group of Vermont highway patrolmen: Arcot "Thorny" Ramathorn (played by Jay Chandrasekhar); Jeff Foster (played by Paul Soter); McIntyre "Mac" Womack (played by Steve Lemme); Robert "Rabbit" Roto (played by Erik Stolhanske); & Rodney Farva (played by Kevin Heffernan). After an unfortunate incident involving Fred Savage (played by Fred Savage), the 5 have gone separate ways: Farva is a construction supervisor, with Mac & Rabbit working for him; Thorny has become a logger; & Foster spends his time with his girlfriend, Chief Ursula Hanson (played by Marisa Coughlan).

One day, the 5 get a call from their former boss, Captain John O'Hagen (played by Brian Cox), about a fishing trip. When they get up there, they find out it's not a fishing trip: instead, Governor Jessman (played by Lynda Carter) has asked them all to oversee the transfer of the Quebec town of St. Georges du Laurent to Vermont, after a recent land survey discovered that some Canadian land was actually meant for the U.S. They must also set up a police department to take over from the Royal Canadian Mounted Police officers in the town: Mountie Bellefuille (played by Tyler Labine); Mountie Archambault (played by Will Sasso); & Mountie Podien (played by Hayes MacArthur).

Although the mayor of St. Georges du Laurent, former hockey player Guy LeFranc (played by Rob Lowe) tries to smooth over the transition, the townsfolk are openly hostile to the takeover, fearing that their culture will be taken away. The troopers only infuriate them more with their jingoism. But when they come across some illegal contraband, it's up to the troopers to save the day with their good old-fashioned shenanigans.

The cast is fantastic. The Broken Lizard troupe (Chandrasekhar, Soter, Lemme, Stolhanske & Heffernan) are all hilarious, & their comedic performances are enhanced by their great chemistry. Brian Cox is also excellent. And Rob Lowe with a Quebec accent is one of the funniest things I'll see this entire year.

Jay Chandrasekhar's direction is good. Although he does hit a few rough spots with the timing of the jokes, he does a great job with keeping a great comedic tone throughout.

This is one of the funniest films of the past couple years. Although it's not perfect, it's a great enough sequel that was long-awaited & appreciated.

Super Troopers 2 was seen by me at the MJR Marketplace Digital Cinema 20 in Sterling Heights, MI on Saturday, April 21, 2018. It is in theaters everywhere. Its runtime is 99 minutes, & it is rated R for crude sexual content & language throughout, drug material & some graphic nudity.
at April 26, 2018