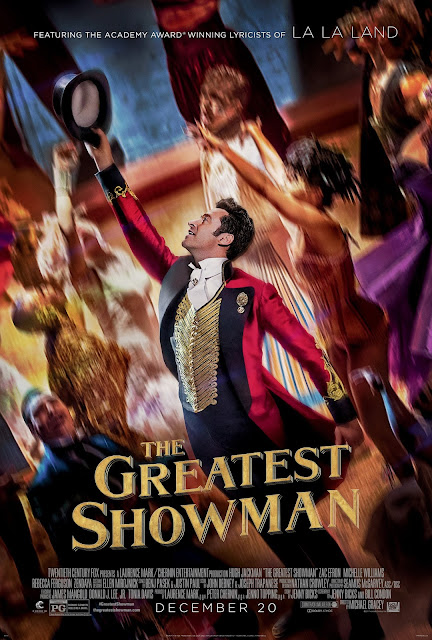 As a theater kid, I've always loved musicals. The ways music can be used to tell a story are so inventive & creative, & it's a shame there aren't as many original film musicals anymore.

The Greatest Showman is a welcome addition to cinema, as this is a great throwback to the classic film musical of the 1940s, 1950s & 1960s. Set in the late 1800s, the film follows P.T. Barnum (played by Hugh Jackman), a shipping company clerk who came from humble beginnings. He still lives a humble life with his wife, Charity (played by Michelle Williams), & their two daughters, Caroline (played by Austyn Johnson) & Helen (played by Cameron Seely).

One day, Barnum is let go when the shipping company closes. Wanting to make a better life, he comes up with an idea to build a museum featuring wax figures & other objects. However, this venture goes under. His children then give him the idea to search for interesting people & less attractive people & use them as performers.

Barnum first hires Charles Stratton (played by Sam Humphrey), a little person who is renamed General Tom Thumb. Next, he hires Lettie Lutz (played by Keala Settle), a bearded lady with a powerful singing voice. He hires others before he hires Anna (played by Zendaya) & W.D. (played by Yahya Abdul-Mateen II) Wheeler, a brother-&-sister acrobatic team.

This venture proves to be very successful; however, the venture is slammed by critics & people protest the showcasing of the performers. Barnum, in order to become more credible with the higher class, hires playwright Phillip Carlyle (played by Zac Efron) to run the show alongside him. Carlyle then starts to become attracted to Anna. Also, he hires famed opera singer Jenny Lind (played by Rebecca Ferguson) for the show as well. But success starts to have its price, as Barnum becomes more withdrawn from his family & society starts to become more angry at the show & its performers.

The cast is phenomenal. Hugh Jackman is so magnetic every time he's on the screen, & his charm & singing voice never fail to intrigue me. Zac Efron also does a great job showing his dramatic chops. Michelle Williams is also great, as always, & shows off her amazing singing skills.

Michael Gracey's direction is excellent. Gracey, in his debut film, has the directing skills of a seasoned veteran, with his atmosphere of wonder & amusement exhuming such strong emotions.

The screenplay by Jenny Bicks & Bill Condon is amazing. The plot is extremely intriguing & the script has some great messages.

Seamus McGarvey's cinematography is astounding. McGarvey's camerawork is so colorful & awe-inspiring & filled with so much panache.

The editing by Tom Cross, Robert Duffy, Joe Hutshing, Michael McCusker, Jon Poll & Spencer Susser is excellent. The editing uses a lot of quick cuts popularized by some great directors, & the pacing is great, as the film flows along at a fast pace.

Ellen Mirojnick's costume design is amazing. The costumes are period-accurate & so colorful & full of panache.

Nathan Crowley's production design is awe-inspiring. The sets are so colorful, full of panache, period-accurate & immersive.

The makeup & hairstyling is excellent. It's period-accurate, & in some cases, especially in the case of Keala Settle's character, is transformative.

The sound design is incredible. It's loud & fun, & the amazing music only adds to the great sounds emanating from the film.

And the original songs by Benj Pasek & Justin Paul are amazing. The songs are so catchy & well-written & are a joy to listen to.

This is one of the more surprising films of the year. Don't listen to what some critics are saying. It's a fun throwback to the old-fashioned musicals, led by a great performance from Hugh Jackman.

The Greatest Showman was seen by me at the MJR Chesterfield Crossing Digital Cinema 16 in Chesterfield Township, MI on Saturday, December 23, 2017. It is in theaters everywhere. Its runtime is 105 minutes, & it is rated PG for thematic elements including a brawl.
at December 28, 2017