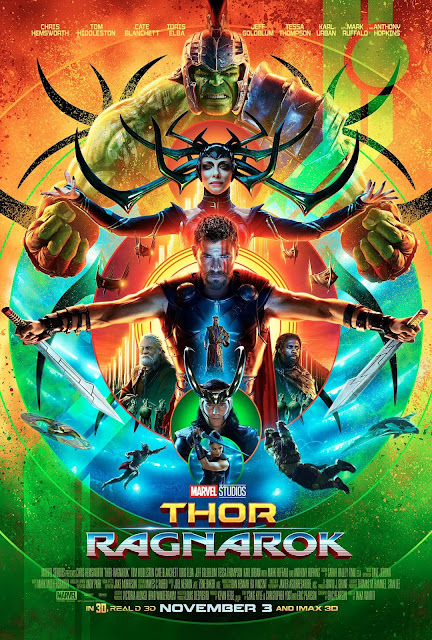 We must all admit this: the Thor films have been the weakest out of all the films in the Marvel Cinematic Universe (along with The Incredible Hulk).

So it's easy to see that I did meet Thor: Ragnarok with some trepidation at first. But I eventually found out how great of a director the film's director, Taika Waititi, is. Then the trailer came out, & I was sold.

And this film could not have exceeded my already high expectations more than it did. It's fun, hilarious, & becomes the best superhero film of the year so far. The film follows Thor (played by Chris Hemsworth), who has returned to Asgard after searching for the Infinity Stones. When he arrives, he forces his brother Loki (played by Tom Hiddleston) to help him find their father, Odin (played by Anthony Hopkins). With the help of Dr. Stephen Strange, AKA Doctor Strange (played by Benedict Cumberbatch), Thor & Loki find Odin in Norway. Odin tells them that he is about to die, & his death will allow their sister, Hela (played by Cate Blanchett), the goddess of death, to be freed & implement Ragnarok, meaning the deaths of many people, including Thor & Loki, & the vast expansion of Asgard's empire over the Nine Realms.

Thor lands on Sakaar, a garbage planet. He is then taken in by Valkyrie (played by Tessa Thompson), a bounty hunter. She takes him to the Grandmaster (played by Jeff Goldblum), the cunning & maniacal ruler of Sakaar, who has already become friends with Loki. The Grandmaster sends Thor into a gladiator contest, where the loser is killed. While waiting for the battle, Thor meets Korg (played by Taika Waititi), an animal made of rocks. When the battle comes, Thor is facing off against... Bruce Banner, AKA Hulk (played by Mark Ruffalo). After the battle, Thor, Hulk & Loki, along with Valkyrie & Korg, team up to defeat Hela & bring peace to the Nine Realms.

The cast is magnificent. Hemsworth, Hiddleston & Ruffalo are excellent. Blanchett is delightfully villainous. Thompson gives an excellent breakout performance. And Jeff Goldblum is as amazing as ever.

Taika Waititi's direction is excellent. Waititi takes a different atmospheric approach from the previous Thor films, & adds his trademark New Zealand humor to the film, & it works so perfectly.

The screenplay by Eric Pearson, Craig Kyle & Christopher Yost is brilliant. The humor lands at every turn, & the characters are so quirky.

Javier Aguirresarobe's cinematography is stunning. It's so colorful & awe-inspiring & it shows in every shot.

Joel Negron & Zene Baker's editing is excellent. It's excellently paced, & it knows where it's going throughout the film.

The sound design is incredible. It's loud & fun & immerses your eardrums.

Mark Mothersbaugh's score is excellent. The music is incredibly bombastic, & it's one of the best scores from the Marvel Cinematic Universe.

And the visual effects are a true wonder. Just like 2016's Doctor Strange & 2017's Guardians of the Galaxy Vol. 2, the effects almost become a character themselves.

This is one of the best superhero films in a while, & definitely the best of the Marvel Cinematic Universe so far. It's fun & colorful & hilarious at every turn.

Thor: Ragnarok was seen by me at the MJR Marketplace Digital Cinema 20 in Sterling Heights, MI on Friday, November 3, 2017. It is in theaters everywhere. Its runtime is 130 minutes, & it is rated PG-13 for intense sequences of sci-fi violence & action, & brief suggestive material.
at November 16, 2017