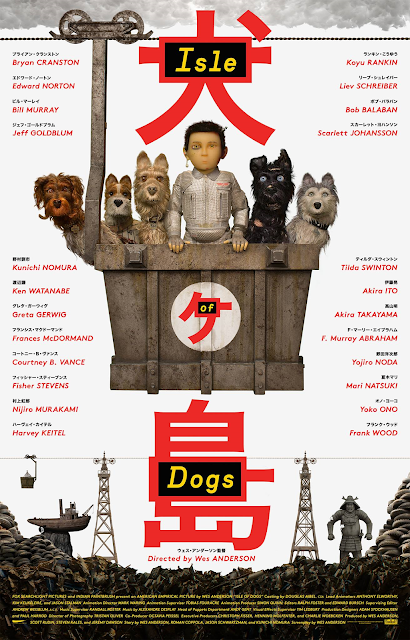 
Wes Anderson is truly one of the most original voices in the history of cinema. With every film he has made, his trademark quirky storytelling & quintessential visual style have been welcome additions to cinema. He definitely is a modern-day auteur.

So, of course Isle of Dogs would be one of my most anticipated films of 2018. And it definitely surpassed those high expectations for it. It's definitely one of Wes Anderson's best films. Set in Japan 20 years from now, the film follows 5 dogs: Chief (voiced by Bryan Cranston); Rex (voiced by Edward Norton); Duke (voiced by Jeff Goldblum); King (voiced by Bob Balaban); & Boss (voiced by Bill Murray). (Note: all of the dogs speak in English. The Japanese characters speak in unsubtitled Japanese, which is translated through either Interpreter Nelson (voiced by Frances McDormand) or a Simul-Translate Machine (voiced by Frank Wood). There is also a semi-frequent Narrator (voiced by Courtney B. Vance).). They, along with all the other dogs from (fictional) Megasaki City, have been forcefully relocated to Trash Island through a decree issued by Mayor Kobayashi (voiced by Kunichi Nomura) in order to prevent the transfer of dog flu & snout fever to the populace, despite news from Professor Watanabe (voiced by Akira Ito) & Assistant Scientist Yoko Ono (voiced by Yoko Ono) that both a cure for dog flu & a treatment for snout fever are almost ready.

Six months after the decree, Atari Kobayashi (voiced by Koyu Rankin), the 12-year-old orphaned nephew & ward of Mayor Kobayashi, lands on Trash Island in search of his former dog, Spots (voiced by Liev Schreiber), who was the first dog sent to Trash Island. Rex, King, Duke & Boss decide to help Atari find Spots; however, Chief refuses, as he does not like to come in contact with humans, as he was a former stray. However, with some persuading from former show dog Nutmeg (voiced by Scarlett Johansson), Chief agrees to help find Spots. Together, they set off on a journey through Trash Island to find Spots, leading them to sage dogs Jupiter (voiced by F. Murray Abraham) & Oracle (voiced by Tilda Swinton), who tell them of a possible "cannibal" tribe of dogs on the other end of the island led by Gondo (voiced by Harvey Keitel) & Scrap (voiced by Fisher Stevens). And this all attracts the attention of American foreign exchange student Tracy Walker (voiced by Greta Gerwig), who believes something more sinister may be occuring.

The cast is amazing. Bryan Cranston easily gives his best film performance, with such heart & humor. Edward Norton, Jeff Goldblum, Bob Balaban & Bill Murray provide some great support voices to Cranston. Koyu Rankin also does some stellar voice work. And it's always a delight to see (or hear) Greta Gerwig in a film.

Wes Anderson's direction is spectacular. All of his trademarks are on full display: whip pans, symmetrical designs, the use of the Futura font, etc. And they are all used excellently. But if you're a Wes Anderson fan, you would already guess that they would.

Alexandre Desplat's score is fantastic. The score is powered by an array of drums, chimes, & a baritone chorus, making for a quirky & haunting listening experience.

And the animation is absolutely wondrous. Stop-motion animation has never been used better than it has here, & it adds to the quirky atmosphere of the film.

This is one of the best animated films I've ever seen. It has some of the best voice work ever, & it's Wes Anderson at his quirkiest. What more could you ask from him?