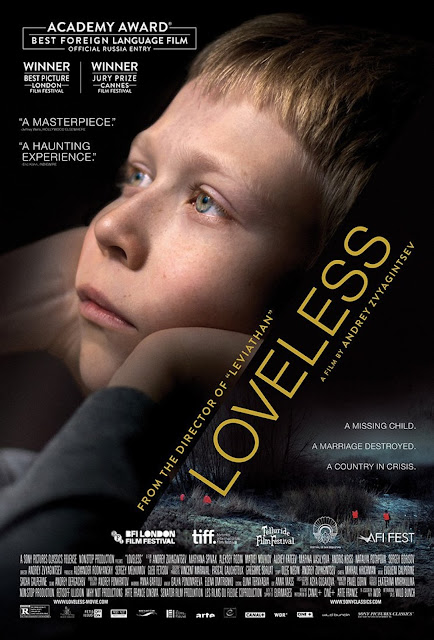 
I'm just going to be honest right off the bat here: some people just shouldn't be parents. Some people are just so cruel & heartless that if they had children, their children would be so scarred in more ways than one. But sadly, other people who are some of the nicest people in the world can't have children. Why they can't have children when other horrible people can, I won't ever know. But anyway, there are a select group of people who shouldn't be parents.

If there was ever a film that showcased this adage, Loveless would be it. It's so bleak & depressing, but so worth the depression. It's so excellently acted & tensely directed that it's worth walking out feeling cold & empty. Set in 2012, the film follows Zhenya (played by Maryana Spivak) & Boris (played by Aleksey Rozin), a couple in Moscow that is in the midst of a divorce.

One day, Alexey disappears, but Zhenya didn't realize it until the school called & said he hasn't been to school in 2 days. The police see this as just another runaway child case, & expect him to return within a few days. However, this quickly passes, & he doesn't return. The police fail to search any further, so a volunteer group takes up the effort. But the longer Alexey is missing, the more loveless Zhenya & Boris ultimately become.

The cast is excellent. Spivak & Rozin fire off of each other so excellently that when they fight, it feels so painfully real. But Novikov is the star here. Although he doesn't have a lot of screen time, he does so much with that screen time as Spivak & Rozin do with much more screen time.

Andrey Zvyagintsev's direction is spectacular. Zvyagintsev manages to get so much powerful emotion out of his actors. His approach to the film is very reminiscent of the films of Ingmar Bergman, evident by the cold atmosphere & the bleak tone.

The screenplay by Andrey Zvyagintsev & Oleg Negin is amazing. The dialogue feels so powerful & is so brutally honest. But the plot is the real gem. At the surface, the film seems to be about Alexey's disappearance & Zhenya & Boris's lives. But if you look a bit deeper, some themes start to arise. The themes of human nature, the views of Russian society, the Russian occupation of Ukraine, & the sociopolitical climate are in the background, but are still dealt with excellently.

And Mikhail Krichman's cinematography is stunning. The color palette is very dark, with a beautiful mix of blues & grays, reflecting the bleak tone of the film.

This is one of the best foreign films of the decade. It's excellently acted & directed, & the themes at the whole of it are so well-explored that it's worth the depression this film will likely give you.

Loveless was seen by me at the Landmark Main Art Theatre in Royal Oak, MI on Friday, March 16, 2018. It is no longer in theaters in the Detroit area. Its runtime is 127 minutes, & it is rated R for strong sexuality, graphic nudity, language & a brief disturbing image.
at March 26, 2018