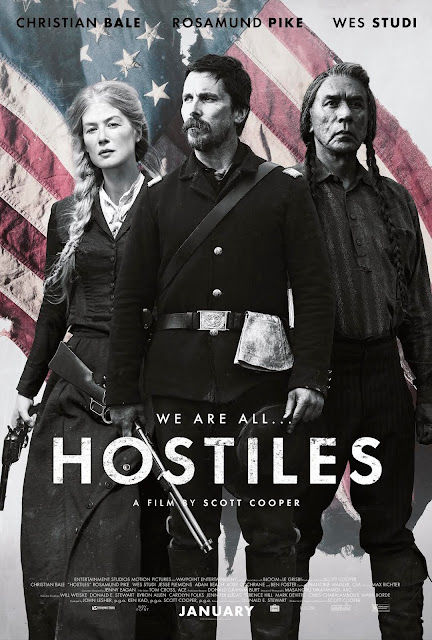 
The Western genre, once the pinnacle of American cinema, had declined over almost the past 4 decades, beginning with Michael Cimino's humungously-budgeted commercial flop Heaven's Gate in 1980. Apart from a brief period in the 1990's (with films such as Dances with Wolves & Unforgiven being the standouts) that faded as quickly as it appeared, the Western genre has been dormant, waiting to be re-awoken.

Over the past decade or so, starting with James Mangold's 2007 remake of 3:10 to Yuma, the Western has had a small revival, continuing with Quentin Tarantino's Django Unchained & The Hateful Eight. While both Tarantino films were commercially successful, the demand still hasn't shown up for the return to the classical Westerns, although modern Westerns may fill that hole.

Hostiles may not be as great as any of the classic Westerns like Stagecoach & The Searchers, but it is just as tense as them & even more brutal. Based on an unpublished manuscript by Donald E. Stewart, & set in 1892, the film follows Capt. Joseph Blocker (played by Christian Bale), a U.S. Cavalry officer. His commanding officer, Col. Abraham Biggs (played by Stephen Lang), assigns him his last mission before retirement: the escort of Cheyenne war chief Yellow Hawk (played by Wes Studi); his son, Black Hawk (played by Adam Beach); his wife, Elk Woman (played by Q'orianka Kilcher); & their son, Little Bear (played by Xavier Horsechief) to their tribal lands in Montana, as Yellow Hawk is nearing death. Blocker is reluctant at first, noting that Yellow Hawk has killed several of his friends, but he agrees, knowing he will be court-martialed if he does not comply with the orders.

Blocker brings 4 men to accompany him: Pvt. Phillippe "Frenchie" DeJardin (played by Timothée Chalamet); Lt. Rudy Kidder (played by Jesse Plemons); 1st Sgt. Thomas Metz (played by Rory Cochrane); & Cpl. Henry Woodson (played by Jonathan Majors). Along the way, they encounter Rosalie Quaid (played by Rosamund Pike), a grief-stricken woman who has lost the will to live after her husband, Wesley (played by Scott Shepherd) & their two daughters & infant son were recently murdered in cold blood by Comanche warriors. After burying her family, she accompanies the crew on their journey to Montana, eventually befriending Yellow Hawk & his family. But the nearby Comanche & the addition of the cruel Sgt. Charles Wills (played by Ben Foster) threaten their journey.

The cast is excellent. Bale & Pike are absolutely killer here, with both performances featuring so much regret & heartache that it shatters your heart. And Foster also further cements himself as one of the most underrated actors in film.

Scott Cooper's direction is amazing. Cooper keeps the tension high at every moment & doesn't hold back when it comes to the unflinching brutality of the Old West.

Scott Cooper's screenplay is good. While the dialogue is great, the plot has some problems. The plot furthers the Native American savage stereotype, moreso in the 1st act, & also tries to add in a love story that feels forced. Also, the story feels a little underwhelming at times, as some moments seem to be just filler for the film.

Masanobu Takayanagi's cinematography is astounding. Every shot of the desolate deserts & plains of the West looks like a grand mural.

Jenny Eagan's costume design is phenomenal. The costumes are very period-accurate, especially the clothing of the Native American characters.

And Donald Graham Burt's production design is amazing. The sets are very period-accurate & transport you into the setting of the film.

This is a really good Western film. Although the screenplay could've used some work, the performances & period elements are enough to overcome the problems.

Hostiles was seen by me at the MJR Marketplace Digital Cinema 20 in Sterling Heights, MI on Friday, February 2, 2018. It is in theaters everywhere. Its runtime is 134 minutes, & it is rated R for strong violence, & language.
at February 19, 2018