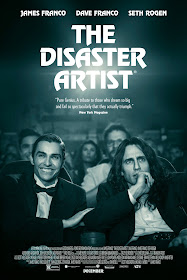 The 2003 film The Room has been noted as "the Citizen Kane of bad movies." It is infamous for its horrible acting, terrible direction, awful screenplay, & cheap production values. However, these huge shortcomings have made it into a cult classic that's so bad it's good. It's spawned sold-out midnight screenings around the world every month, where people dress up as their favorite characters, yell at the film, & throw plastic spoons at the screen. In this case, it is this generation's The Rocky Horror Picture Show.

But what if I told you that the craziest film ever made isn't as crazy as the people behind it or the making of the film itself?

The Disaster Artist brilliantly shows the story of the making of The Room, showcasing a successful failure behind the scenes. Based on the 2013 book of the same name by Greg Sestero & Tom Bissell, & set from 1998-2003, the film follows Tommy Wiseau (played by James Franco), a man of unknown heritage (he says he's from New Orleans, which we can definitely tell is false due to his obviously Eastern European accent), undeterminable age (he says he's 19, but we can definitely tell he's at least in his late 40's), & untraceable wealth (he's rich, but we definitely can't tell how he got his wealth). He is unapologetically brash, secretive, & just overall incredibly odd. He lives in San Francisco, but wants to make it big in Hollywood as an actor & director. He is fearless & wants to show everyone what he can do.

One day after an acting class run by Jean Shelton (played by Melanie Griffith), Tommy meets Greg Sestero (played by Dave Franco), a 19-year-old aspiring actor suffering from stage fright. Eventually, they begin a bizarre but strong friendship, & move to Los Angeles to pursue their careers.

In Los Angeles, Greg signs with noted talent agent Iris Burton (played by Sharon Stone), while Tommy is rejected again & again. Greg also starts a relationship with Amber (played by Alison Brie), a bartender. Tommy wants to move back to San Francisco after countless rejections, & Greg's career has stagnated after many failed auditions. Frustrated with their lack of success, Tommy & Greg decide to make their own film.

Out of this situation comes The Room. Over the course of 3 years, Tommy writes the film, which he will also direct. The plot of the film is simple: Johnny, a "true American hero" with good looks & many friends (who Tommy will be playing), lives with his fiancée, Lisa, who is secretly disillusioned with Johnny & is having an affair with his best friend, Mark (who Greg will be playing). Greg, although realizing the script is horrible, tells Tommy it's great & accepts the offer to do the film.

Tommy's approach to film production is awkward to say the least. Instead of renting cameras from Birns & Sawyer, he buys them, & instead of filming on either 35mm film or HD Digital, he films with both cameras simultaneously. Due to this, Bill Meurer (played by Hannibal Burress) & Peter Anway (played by Jason Mantzoukas), the owners of Birns & Sawyer, offer to have them film The Room at their studios. The cast & crew are eventually set: Juliette Danielle (played by Ari Graynor) will play Lisa; Philip Haldiman (played by Josh Hutcherson) will play Denny, the surrogate son of Johnny & Lisa; Carolyn Minnott (played by Jacki Weaver) will play Claudette, Lisa's mother; Dan Janjigian (played by Zac Efron) will play Chris-R, a drug dealer; Robyn Paris (played by June Diane Raphael) will play Michelle, Lisa's best friend; Scott Holmes (played by Andrew Santino) will play Mike, Michelle's boyfriend; & Kyle Vogt (played by Nathan Fielder) will play Peter, Johnny's psychologist friend. The crew includes Sandy Schklair (played by Seth Rogen), who will be the script supervisor (but ends up taking over most of the directorial responsibilities); Raphael Smadja (played by Paul Scheer), who will be the director of photography; & Safowa Bright (played by Charlyne Yi), who will be the costume designer.

The filming goes smooth at first, but manages to get really bad. The film goes past the original shooting schedule, Tommy's narcissism bubbles to the surface, the work environment is extremely toxic, & Tommy forgets his lines from the script that he himself wrote. All of these problems just get bigger & bigger, & when the film finally sees the light of day, no one will be the same.

The cast is excellent. James Franco is nothing short of spectacular. His performance is one of the best of the century, & he should definitely win the Oscar for Best Actor. He completely disappears into Tommy Wiseau, & nails down his mannerisms & the accent.

Dave Franco is also amazing as Greg Sestero. He nails his look, & a great amount of his great performance here comes from his amazing chemistry with his brother, James.

Seth Rogen is also great in his role. At first, his character acts like he's seen & done everything, but realizes that's false later on as he watches the trainwreck unfold.

The rest of the cast, especially Hutcherson, Efron, Graynor & Weaver, nail their small roles & are uncannily similar to the actors they portray & the characters their actors portray.

James Franco's direction is excellent. Franco has directed many duds in his career. But here, he has managed to break out of that bad spell & direct what is by far his best film yet. He seems to have been influenced by Paul Thomas Anderson, as noted when Franco compared the film to a mixture of Boogie Nights & The Master, both films directed by Paul Thomas Anderson. But Franco uses that directorial style extremely well.

The screenplay by Scott Neustadter & Michael H. Weber is brilliant. The film stays very true to the book, & the dialogue is both hilarious & heartfelt. The script could've easily portrayed the cast & crew's efforts as foolish, but instead portrays the efforts in a respectful manner, knowing that at the forefront of The Room, it was made by a man following his dreams.

This is one of the 3 best films of the year. Along with being a hilarious documentation of the making of the best worst film ever made, it's a shining testament to never giving up on your dreams.

The Disaster Artist was seen by me at the MJR Troy Grand Digital Cinema 16 in Troy, MI on Friday, December 8, 2017. It is in theaters everywhere. Its runtime is 104 minutes, & it is rated R for language throughout & some sexuality/nudity.
at December 10, 2017
Share